Soon, you may not be able to port your mobile number

News
Soon, you may not be able to port your mobile number

NEW DELHI: Mobile phone users looking to switch carriers while retaining their numbers could face difficulties after March next year. Mobile number portability (MNP), as it’s known, is currently functioning smoothly but the two companies that carry out the service in India — MNPInterconnection Telecom Solutions and Syniverse Technologies — have written to the Department of Telecommunications (DoT) that the near-80% reduction in porting fees since January has led to daily losses and will force them to shut services once their licence terms come to an end in March 2019, said people with knowledge of the matter.

If they follow through with their threats, customers who want to change their service provider due to poor call quality, billing issues or tariffs will be left with no option to do so — at least in the near term. India has implemented the policy to protect consumers and ensure service quality is maintained amid industry consolidation.

A DoT official said it would seek replacements if the matter isn’t settled in time.

The process itself is being further simplified and switching carriers is being made faster. 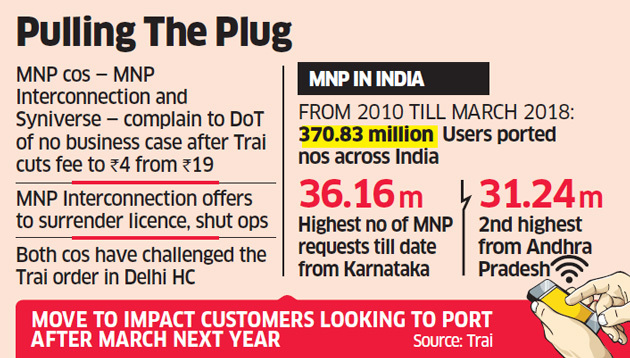 MNP Interconnection, which handles south and east India, has said it will surrender its licence and stop operations, while Syniverse Technologies, which handles north and western India, has told DoT of its acute financial problems due to the Telecom Regulatory Authority of India (Trai) order to slash charges to Rs 4 per transaction from Rs 19.
The companies, which have together handled more than 370 million porting requests until March this year — about 20 million in that last month alone — have also moved court against the regulator, saying the reduction was arbitrary and nontransparent. The case will be heard next on July 4.

“We have written to DoT that our company will not be in a position to provide MNP services primarily because the tariff has been revised to Rs 4, which has made the business unviable and unsustainable as we’re sustaining losses on a daily basis and can’t even pay salaries,” a senior executive at MNP Interconnection Telecom Solutions told ET on the condition of anonymity.

A senior Syniverse executive said the situation has been made worse by Trai making changes to how payments are calculated.

“In its tariff order, Trai said that the porting fee to the MNP provider will only be paid for every successful port, as opposed to the work-done principle, which was the case before the rules were changed in January,” the person said.

This means that if, for any reason, a porting request is not successful, MNP providers will go unpaid despite use of their resources. This in turn means that the effective porting fee comes to less than Rs 4 per request, a point MNP Interconnection has also made in its letter to the DoT.A DoT official said the government wants the issue raised by the two companies to be resolved, but would “prepare for the worst” and issue tenders for new players before the existing licences expire.

An industry insider, however, said it may be difficult to attract others when the existing ones say they don’t have a business case. “Even if one of the operators stops the services, MNP for the entire country will suffer because the second operator can’t immediately take up the role vacated by the first for the fear of creating a monopoly, and finding a new player will take several months — if anyone is interested,” said an industry source. MNP declined to comment.

“While we do not comment on pending legal activity, it is important to (note) that Syniverse has not made any confirmations to the DoT whether or not we will renew our MNP licence when it comes up for renewal in March 2019,” said Himanshu Goel, managing director, India, Middle East and Africa, Syniverse.

Experience a powerful smartphone that resonates with affordability and performance with the Redmi 6A smartphone. Shop online at Amazon India for the new Redmi 6A and experience great features like 5.45-inch full screen HD+ resolution display, AI face unlock, 13MP HD primary camera, dual SIM and storage expansion and more …

Paytm Add Money Offer – Get Upto Rs 1000 Cashback, Are you searching for paytm add money cashback offers ? if your answer is yes then you are landed on the right page. In this post we have mentioned some of the best add money offers of paytm, i hope you know …

The Central Statistics Office (CSO) today presented India’s Wholesale Price Index (WPI) Inflation for the month of August 2018, where it stood at 4.53% compared to 5.09% of July 2018. However, WPI was higher compared to 3.24% rate recorded in the similar month of previous year. With this, duild up …